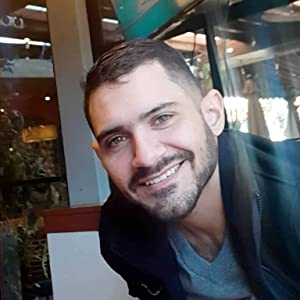 Here's the short version of my life; I was born in Los Angeles, served in the Air Force, survived Iraq twice, moonlighted as a bounty hunter, walked across America, earned a master's degree in aromatherapy, and settled on working as a freelance writer. I am currently married to a wonderful man, and we live in Mexico.

I was born in Los Angeles and raised in the suburbs. Growing up in my home was like being raised by Dharma and Greg, with my dad a down-to-earth business executive, and my mom a magick-practicing woman of spirituality. Not having many friends, I spent most of my free time at public libraries and local bookstores, mostly hovering around the bookshelves labeled "New Age". It was in those bookshelves that I found writers like Ray Buckland, Scott Cunningham, Gavin and Yvonne Frost, Ted Andrews, and the like. I remember thinking how great it would be to earn a living writing about such magickal topics, but I had no idea how such a dream could be made a reality - so I largely abandoned those ideas as a teenager.

At 17 I enlisted in the US Air Force, and served as a military policeman for just over six years, from 2003 to 2010. In 2005 I served as a prison guard at the Theater Internment Facility located on Camp Bucca, Iraq, (USAF 586th ESFS attached to US Army 18th MP Brigade) where I was present for two of the many riots that occurred at that facility. In 2007, I served as a Humvee driver assigned to a Police Transition Team operating throughout Baghdad, Iraq (USAF 732nd ESFS, Detachment 3, attached to US Army 89th MP Brigade). When not keeping tabs on Iraqi Police forces, my team facilitated the safe transportation of military and civilian police officials around the city.

While still on active duty, and in between deployments, I moonlighted as a bounty hunter, working under a private investigator's license in Texas (2006 to 2008), and under a bail enforcement license in Washington state (2008 to 2010).

​I left active duty as an Air Force Staff Sergeant in 2010.  That same year I completed my bachelor's degree in criminal justice.

Immediately after my discharge, I took to working as a freelance writer for private business clients, mostly churning out copy for blog posts, web pages, and even social media status updates. I was good at what I did, I think, but I knew I was not necessarily passionate about what I was writing.

From November 11th, 2013 to November 11th, 2015, hungry for another adventure, I walked over 3,000 miles across America, from the Pacific Ocean to the Atlantic Ocean, by way of California, Arizona, New Mexico, Texas, Louisiana, Mississippi, Alabama, and Florida. I met many great people, spent a lot of time alone with my thoughts, and learned a lot about taking life one step at a time.

In 2016, my dad passed away at the age of 72, and my mother, who had earlier retired to Tijuana, Mexico, invited me to visit her. I did, and it was in Tijuana that my passions for magick and witchcraft were reignited. Tijuana, I came to learn, is a very magickal city, and it was in Tijuana where I first learned of Santa Muerte, or Holy Death, the Mexican folk saint who is venerated as death itself. I was fascinated, and began to read, watch, and observe everything that I could about Santa Muerte, and especially how the locals interacted with her cloaked figure. Eventually, I started to interact with Santa Muerte for myself, and one day left a gold offering candle at a public Santa Muerte altar. As is customary, I asked Santa Muerte for a blessing in return for the candle - asking her to send me business clients who would buy my writing. Santa Muerte did me one better, and inspired me to begin writing blog posts, and eventually books, which were all about Santa Muerte magick and Santa Muerte devotion. Today, I no longer write for private business clients, and am blessed to be able to write about topics that I am passionate about - just like the authors I used to admire in the "New Age" sections of libraries and bookstores.

Between 2018 and 2019, not wanting to let my military education benefits expire, I went back to school and studied by correspondence, from Mexico, for my ​master's degree in aromatherapy. To be completely honest, I had no idea what aromatherapy was when I signed up for the course. I thought I knew what it was - junk and pseudoscience - but I was proven absolutely wrong when I discovered that the foundations of aromatherapy science are chemistry, biology, and anatomy. Today, armed with a desire to educate the public about the many misconceptions of aromatherapy, I write articles as often as I can about the true nature, and the true science, of aromatherapy and essential oils.

In 2020, I started writing and publishing videos to TikTok. I mostly share short videos, what I call mini-documentaries, on what I think are interesting true stories.

Also in 2020, a man moved into my mother's apartment building in Tijuana, and we were introduced. That man is now my husband, and we live together in Mexico.
ArnoldBustillo.com ​is a publication
​of Bustillo Guerrero, LLC
​www.BustilloGuerrero.com
​Copyright 2022
Powered by